Cadets came from across Staffordshire, South Cheshire and the Black Country to plant the trees, which were donated by the Woodland Trust, providing a legacy of the anniversary year for generations to come. 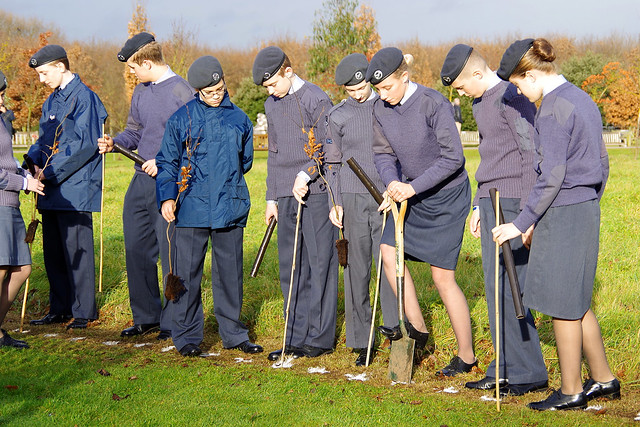 Cadets get digging at the NMA

Despite it being a chilly morning, the 75 young cadets were eager to get stuck in, and with spades and saplings in hand, an avenue of trees was created next to the Arboretum’s Royal Air Force Association memorial. Cadets also unveiled a special plaque marking the occasion, so that Arboretum visitors would understand the significance of the row of beech trees for years to come

All 31 squadrons of the Wing were represented, with cadets from travelling from Buxton, West Bromwich, Stafford, Burton and everywhere in between.

Cadet Hana Stamp of 1444 (Brownhills) Squadron was one of the RAF Cadets present at the event. Hana, who has been a member of the cadets for six months, said, “It was great to be involved in such an important event and be part of our 75th anniversary. The team from the Arboretum gave us a short lesson on how to plant the trees so they grow properly, and then we jumped straight in to the digging. We worked in pairs but all 75 of us got a tree to call our own. I made a note of which one is mine so I can visit again and see how its growing.”

“It was a bit cold, but I’m glad I came as my tree will be around for many years, even hopefully for our 100th anniversary. I love being a member of the Air Cadets as it means I get to take part in loads of fun activities. I’m always busy; I was recently involved in the local remembrance parade and I can’t wait till I get to go gliding and gain my gliding wings.” 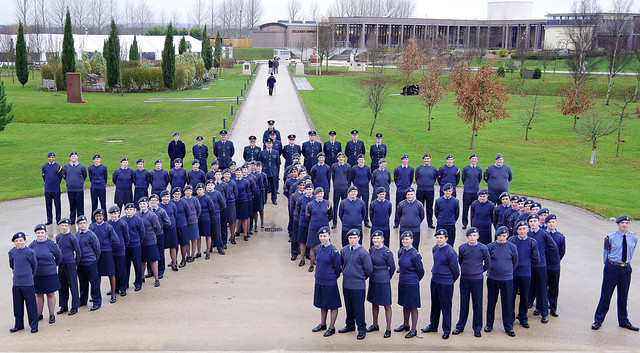 Wing Commander Sharrard-Williams, Officer Commanding of Staffordshire Wing Air Cadets, planted the first tree in the avenue. He said, “I’m really grateful to both the National Memorial Arboretum and the Woodland Trust for making today’s event possible, and ensuring we have a lasting marker of our 75th anniversary in the beautiful grounds of the Arboretum.

“It was a real honour to be joined by so many cadets from right across the Wing, and to be able unveil a plaque to mark the occasion. We’ve had a really busy year, full of celebrations to mark this special year. We started off the year in February with a parade, we launched a torch relay with our own Olympic-style torch passed from squadron to squadron, and we paraded over 1000 cadets and staff through the streets of Stafford in September.’

“We’ve got a final finale concert to round things off in February next year at the Stafford Gatehouse Theatre and then we can have a bit of a break. For us, 2017 will be about building on the great work of our organisation. We’ll be recruiting more adult volunteers and cadets, getting more cadets gliding and building relationships with local employers and industry, especially those in STEM (Science Technology Engineering and Maths).”

Staffordshire Wing has units right across the county and are recruiting now. Cadets can join from school year 8 and get to take part in a host of activities such as flying and gliding, shooting, sports, adventure training and the Duke of Edinburgh Award to name a few. The Wing is also on the hunt for adult volunteers age 20 up who can offer a few hours a week to help deliver these activities. For more information, visit www.staffswing.org.uk.